Urban traffic congestion is a huge headache for all major cities, with public transport infrastructures often crowded and roads frustratingly busy for drivers. How long will it be before humans take to the skies for reliable, quick transport around the city?

The major question hovering over the future of air taxis is that of safety, and working out how taxi drones could fit into the lower airspace. This link between innovation and safety in drone technology is under discussion at the FAI International Drone Conference and Expo, with airspace experts from around the world sharing the platform with the most brilliant minds in drone innovation, in the hopes that the drone ecosystem can be built via close collaboration.

There are several businesses developing individual urban air transport; amongst them is German company, Volocopter. At the International Drone Conference on Saturday 1st September at 14:00, Max Hjalmarsson will present the Volocopter X2 - an 18-rotor taxi drone - and invite delegates to imagine the yellow cabs of the future.

Ahead of the conference, we asked Alex Zosel, Co-Founder and Chief Innovation Officer at Volocopter for an insight into the future of taxi drones. He believes that seeing taxi drones in our skies will happen in the next few years:

Alex, how far away are we from seeing taxi drones as public transport in major cities?

“Its closer than you think, we expect the next demo cases to happen in 2019 and the first commercial routes will be open for use within five years. In Bruchsal, near Volocopter’s headquarters, the Volocopter flies regularly as part of our flight test program, showing that technologically, air taxis are possible. Now we are working together with cities and partners to show how such an air taxi system can be integrated in existing infrastructure.”

The Volocopter aims to relieve city congestion as an urban public transport possibility rather than being developed for personal use. Why is that so important to the company?

“There are several aspects playing into that. Helping to relieve the impeding traffic chaos in megacities and changing the way people travel around their home town, is only possible, if you provide a service with high capacity. Offering an air taxi for a few rich people will not solve the infrastructure challenges cities are facing today. We are also big fans of flying, so making urban air taxis affordable for the many, not the few, is important. Taxi drones will allow them to see their city from a whole new perspective. I like the idea of that.” 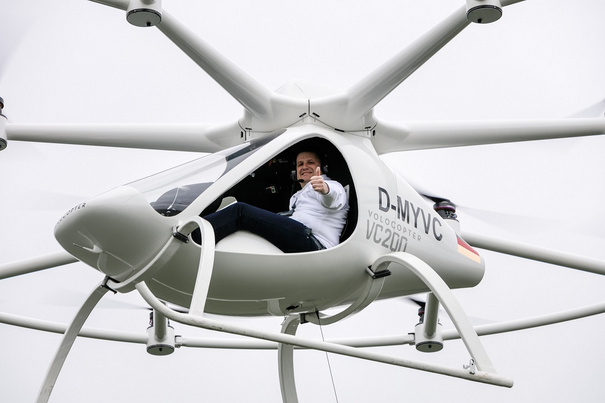 Volocopter prides itself on German engineering, is that a major advantage when presenting to potential investors?

“Our location in Germany is certainly an advantage. There are great engineering universities and professionals based here, especially in Stuttgart where there is a strong program for air and space engineering which provides us with great local talent. The German mindset of perfectionism is an important asset especially when building urban air taxis; safety is paramount in our business. In the end, people on the streets and users will only accept Volocopter air taxis if they are as safe as possible. That being said, we might have our headquarters in Germany, but our team is very international.”

Which will be the first city to install Volocopter hubs?

“Cities from around the world are approaching us to integrate air taxis into their mobility solutions. It is impossible to say which city will open the first commercial Volocopter route at this moment, but in the past few months, a number of Asian cities have been very keen to show their innovative spirit and smartness by pushing the topic of air taxis.”

What are the key challenges for installation of an air taxi network, and how can they be overcome?

“The two biggest topics that still need to be defined before air taxis take off are the air traffic management system for the lower air space in cities and regulation. The air traffic management system will monitor and coordinate all Volocopters, emergency helicopters, parcel drones and other participants in the lower airspace. There are already many advanced projects working on this around the world, and with some of them we are already in discussions as potential partners.The other topic is certification. As we are already in close contact with the European Aviation Safety Agency (EASA) to define what is necessary for certification and what a flight test program will look like, we know that they are excited to be an enabler of this new technology. We are confident that these topics will be decided in the next 3 -5 years.”

Airspace safety is a central focus at the FAI International Drones Conference and Expo, taking place in Lausanne from 31st August – 2nd September, with half a day dedicated to drone safety on 1st September. Many ATC experts will attend the conference, and presentations on the subject include:

Just as airspace regulators will need to adopt blue-sky thinking to accommodate the exponential rise in drone use for transport, delivery and sports, pushing the boundaries of the imagination is something that drone developers are not afraid of. Alex believes wholeheartedly that the solution to traffic congestion, emissions and high infrastructure costs lies in the skies, and therefore requires a pioneering spirit:

“Social challenges of this magnitude require a new perspective at times. In our case: the third dimension. We want to make every human being’s dream of flying come true!”