Switzerland’s Dario Neuenschwander (top picture) hurtled his way to the front of the field in the FAI Drone Racing World Cup 2017, fighting off competition from 433 drone pilots from 37 countries.

His overall score of 142 points put him ahead of Andreas Hahn of Germany, who took second place with 134 points, and French junior competitor Thomas Grout (pictured right), who ended in third position after 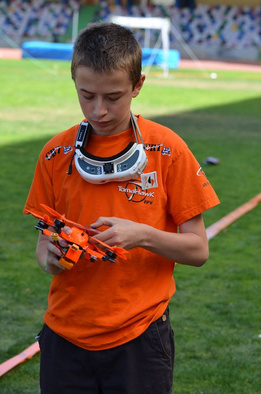 earning a total of 120 points.

Neuenschwander, 29, lives in the Swiss town of Würenlos and has been racing drones for just two years.

He said: “I really enjoyed travelling around the world meeting great pilots while taking part in this unique event. It was an amazing experience."

Of the 75 junior pilots in the competition, victory went to overall bronze medallist Thomas Grout. He narrowly beat fellow junior Alejandro Zamora Cabanas of Spain, who ended in fourth place with 118 points, and Poland’s junior Jan Wielgosz with 115 points.

Thomas Grout said: "I am delighted to finish in third place in the FAI World Cup, and am very proud to do that in the French colours. There are more and more excellent pilots, so I am pleased to have competed so well against them at the different competitions around the world. My congratulations to this year's winner: Dario."

FAI Drone Racing World Cup coordinator Bruno Delor said: “With three junior pilots to finish in the top five of the general placing is truly extraordinary and has probably never arrived in any other aeromodelling class World Cup. Their success demonstrates how quickly junior competitors can become extremely accomplished in this exciting young sport.”

Hahn and Grout will join him on the podium at the awards ceremony to receive their FAI medals and diplomas.

This second edition of the FAI Drone Racing World Cup was even bigger and better than the first. An incredible 434 pilots from 37 countries took part in this year’s event – up from 229 pilots from 17 countries in 2016. The number of younger pilots taking part also soared from 18 in 2016 to 75 this year.

The competition began in Seville in southern Spain, with the 2017 Open Internacional Ciudad de Sevilla, which ran from March 24 to 26. France, Poland, Portugal, Korea, Ukraine, Austria, Ukraine, Australia were among the countries to host events this year for this year’s World Cup, which culminated back where it started in Seville with La Rinconada earlier this month.

At each event, competitors took part in a series of races in which they flew a multi-rotor drone with at least three power-driven propellers and weighing up to 1kg. The number of World Cup points awarded was dependant on the number of competitors taking part.

Of the 16 qualifying events, just one - the Kyiv Rotor Cup, which took place in the Ukraine in June - was unable to be taken into account due to damage suffered by the results server during a heavy rain storm.

Drone Racing is the most recent discipline governed by FAI, the World Air Sports Federation.

Multi-rotor FPV - or drone - racing competitions consist of successive races in which several (normally four) radio control model aircraft fight it out to be the fastest around a pre-determined circuit. The events can take place outside or indoor.

The high-tech drones used are equipped with on-board video cameras that transmit images to headsets worn by the pilots, allowing them to steer the tiny aircraft around the race circuit.

FAI promotes Drone Racing activities to the world. The Federation has recently awarded the organisation of the 1st FAI Drone Racing World Championship 2018 to Shenzhen, China. Furthermore, FAI is developing a global Drone Racing series that represents the Drone Racing community from grassroots to elite level.