In 2019 the IGC, the world's highest authority in the Gliding Sports in the world’s highest aviation authority FAI - Fédération Aéronautique Internationale - will celebrate two Awards, the jubilee of the first Lilienthal Medal for Gliding 1938 given in January 1939 at Paris to Tadeusz Gora (Poland) and the 1995 World Soaring Cup (WSC) a challenge cup initially given by New Zealand competition gliding enthusiasts.  In 2018 the IGC Plenary approved a proposal that the WSC would be given annually to the IGC Champion Pilot of the Year.  In 2018 the first recipient was Michael Sommer (Germany) for his performance in the Open Class at the World Championships in Hosin, Czech Republic. Mr. Sommer received the WSC in a dedicated and highly acknowledged national ceremony in the recipient's home-land.

In 1938 the FAI decided to issue the Lilienthal Medal for Gliding, selected by the FAI Commission for Gliding, at this time named Commission Internationale de Vol Sans Moteur (CIVSM), meaning for flight without engine (in this era French was the international aviation language). The aim was to honour that soaring pilot with the most outstanding performance of the year, the longest flight in a straight distance. In 1938 it has been the Polish soaring pilot Tadeusz Gora for his cross-country soaring flight May 18, 1938 from Bezmiechowa to Soleczniki Male, both in Poland, 577,8 km. 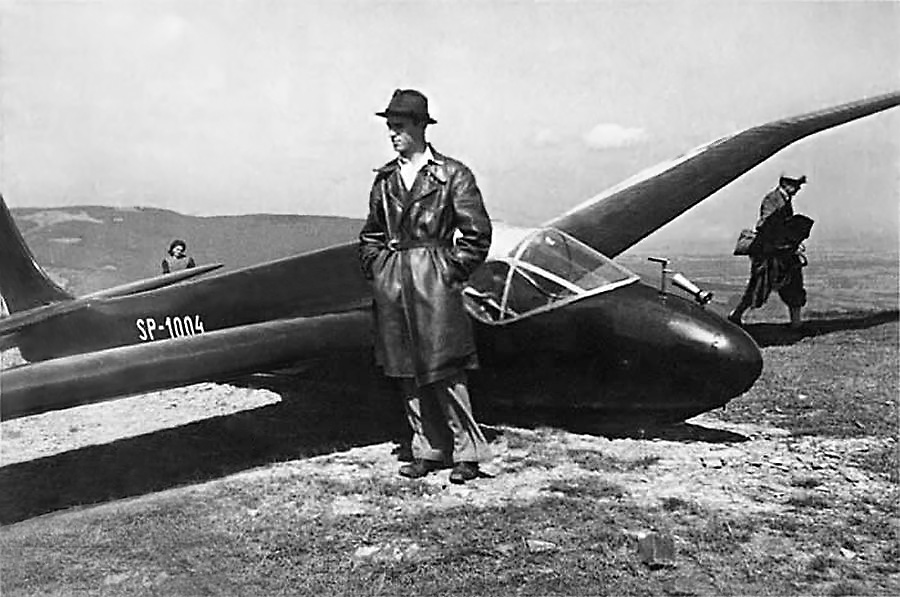 Born January 19, 1918 in Krakow Tadeusz Gora found to aviation in 1933 as member in the Vilnius Aeroclub. In 1936 he moved to the Gliding Academy in Bezmiechowa in the Carpathians, the Polish Wasserkuppe, soon showing his abilities by developing his gliding skills. One morning his instructor Adam Dziurzynski guessed good conditions and tasked Tadeusz for a cross country flight. Tomasz Kawa reports the personal statement of the late Tadeusz Gora at the question to which goal he would like to fly: "to Vilnius"! To his mom? After the common bungee cord start and 100 km in weak thermal and slope lift he reached decent currents: "on the right blue, on the left blue and I'm flying the magnificent PWS 101 under ever stronger trail of clouds in the climbs up to 5 m/sec." It was a convergence, rather unknown at that time. These good conditions ended before Lithuania, after a last cloud over Lida. Finally he landed in Solneczki near Vilnius gaining the Medal distance of 577,8 km. 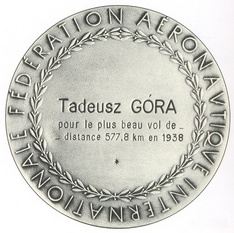 Due to the beginning of the 2nd World War the possible impact issue at the Polish glider movement caused no significant effects, although in 1939 he showed exceptional performances again. Gora served as a fighter pilot in the Polish squadron of the RAF during the war. After the war Gora's reputation as the first Lilienthal Medal recipient later opened his life as an instructor for all kinds of aircraft including military jets. He never stopped gliding, finally earning the Gold C and three diamonds, with the Lilienthal flight as first condition for the Gold C. Tadeusz Gora passed away January 4, 2010 at Swidnik, Poland, still well known as The Polish Gliding Pioneer. 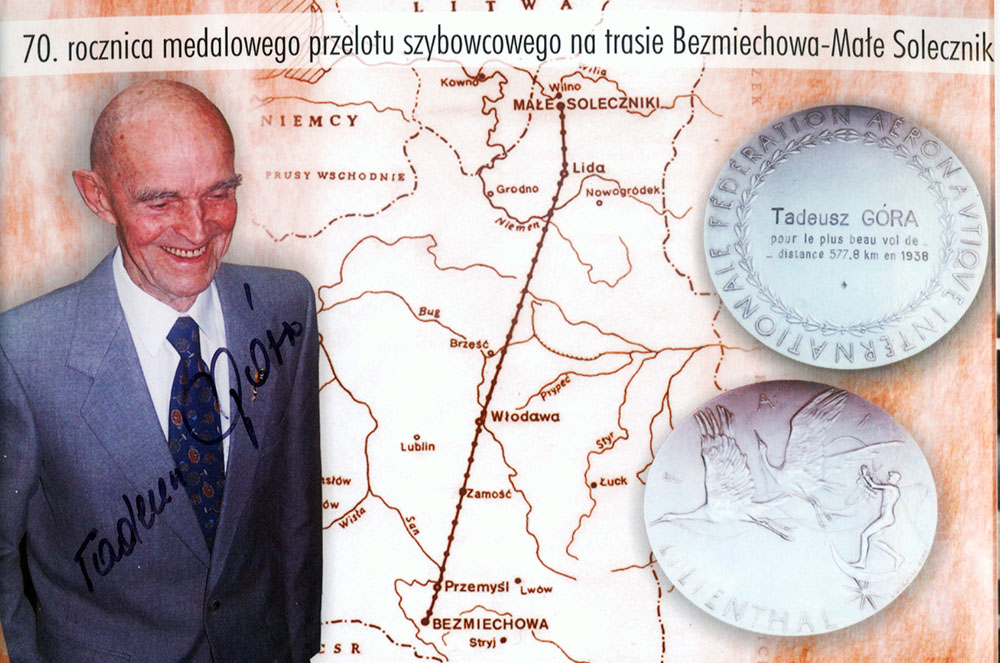 In 1954 Philip Wills, Great Britain, received the Lilienthal Medal for his life-time performances in techniques and as an aviator for gliding. In the following years Dr. Joachim Kuettner, Germany, Dr. Paul McCready, United States of America, Don Luis Vicente Juez, Spain, and Wolf Hirth, Germany, men with outstanding merits for the soaring movement worldwide, received the Lilienthal Medal without necessarily being an active top pilot in the relevant year.   Today the Lilienthal Medal still stands for highest performances and merits in favour of the international gliding movement and as well for recent flight achievements not necessarily in FAI World Gliding Championships.

With the World Soaring Cup for the IGC Champion Pilot of the Year the IGC goes back to the roots of the Lilienthal Medal, reviving the original intention by honouring exclusively a pilot for his actual performance as the best in the close circle of the winners in all the classes of the World Gliding Championships of the current calendar year. It will be awarded annually with classified World Gliding Competitions. The not too complicated calculation rules are based on the winning scores of all World Gliding Championships of the calendar year. The World Champion pilot with the best score (percentage score out of the maximum score achievable in any World Championship class) will gain the World Soaring Cup and the title of IGC Champion Pilot of the Year. For 2018 Michael Sommer, Germany, proved to become the first IGC Champion Pilot of the Year: 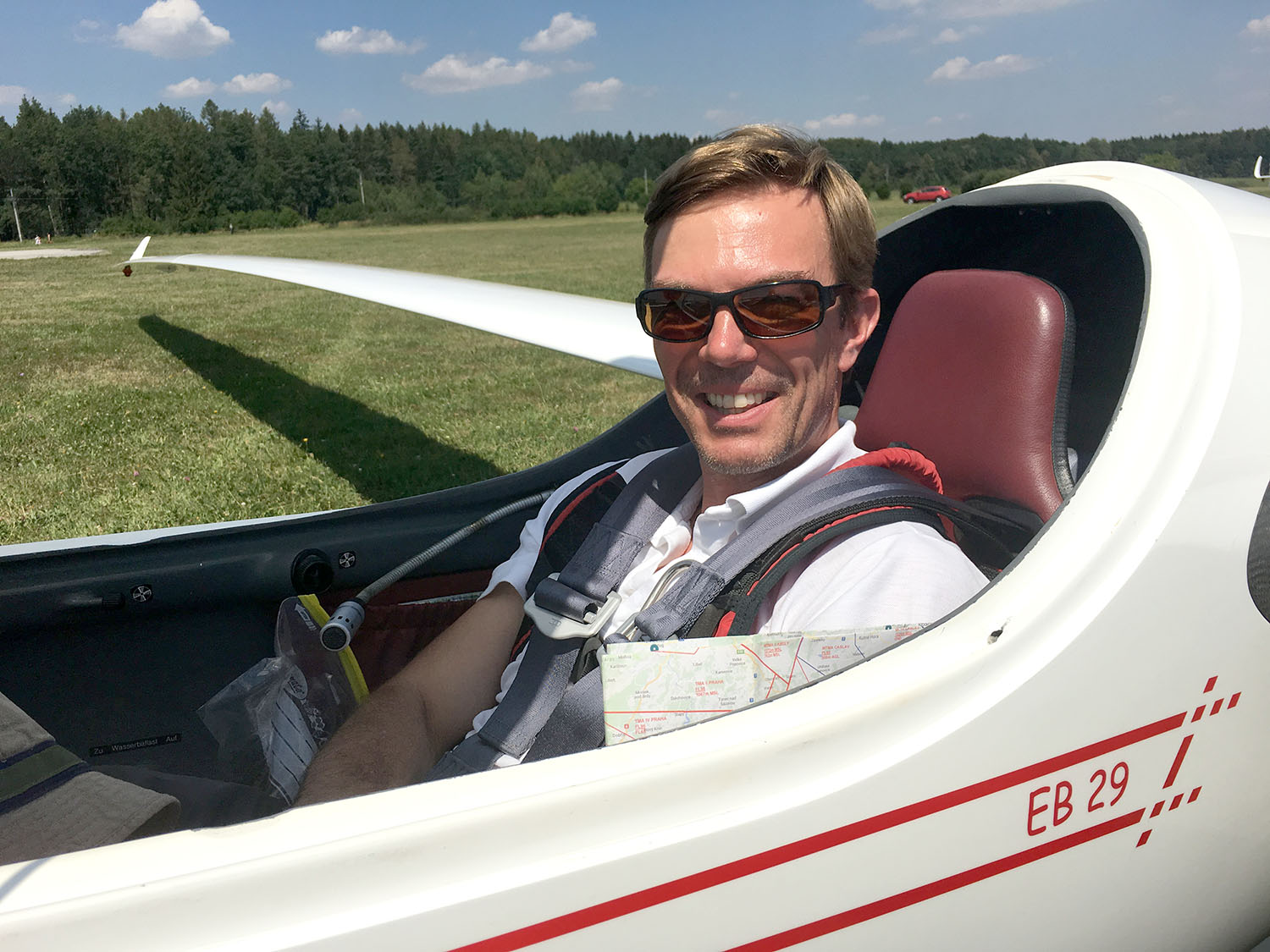 Born late in 1973 Michael Sommer started gliding in the age of 14 not far from Frankfurt/Main. Soon with his own Standard Class glider, a LS 1f, he competed in the German Junior Championships demonstrating his talents as twice National Junior Champion. For his success he has been honoured by getting for two years the right to fly the Nimbus 4 'EP', donated by Lady Earl Enid Padget for the education and training of the best Junior in the period before. Flying this large ship opened his eyes for the Open Class, its elegance, vast performance and the wider freedom in flight decisions due to the longer gliding range dominating the less comfortable handling at ground and smoother reaction in the air. When these two years ended in 1999, Dr. Herbert Märtin offered him an ASW 22 BLE for the next ten years competing for the winners' stage. Since 2010 he's flying Binder's EB 29. With these two sailplanes Mr. Sommer became five times World Champion in the open class: 2006 Eskilstuna (SWE), 2008 Luesse (GER), 2010 Szeged (HUN), 2014 Leszno (POL) and 2018 (Hosin (CZE), and three times vice-World Champion amongst other titles in German National Championships and European Continental Championships. Michael Sommer states: "My real empowerment is the pure joy offered in flying a glider, without competition with others, just by optimizing the flight envelope possible for the day to a maximum. In former years before I started my profession engagement more often so I could perform and enjoy this challenge, now besides my profession's career the less time in the cockpit of my beloved ship has become preciously."

As the first named IGC Champion Pilot of the Year, Michael Sommer honours more than his dominance within the small circle of World Champions in 2018. This IGC Award also honours a constant straight development to and into the highest level in soaring, five times World Champion in the Open Class.

Michael Sommer received the World Soaring Cup in the name of IGC President Eric Mozer during the high-level Gala Dinner of the German Aero Club on November 23 in 2018 at Essen, Germany, in the presence of Politics, Economics, Sports and Press delegates.