The FAI is waiting for the record claim documentation to ratify this performance as a new world record. If ratified the flight would set a new record in the absolute altitude on a glider. It is the second time in just a few days that the aircraft has reached over 60,000 to beat their own existing world record.

To achieve this high altitude flight, the purpose-built, pressurised high-altitude glider also passed the Armstrong Line, the point in the atmosphere at which human blood boils unless protected. The crew - Jim Payne and Miguel Iturmendi – use a specially designed closed-loop rebreather system, in which the only oxygen used is what the crew metabolizes. The aircraft’s wings designed to be able to fly in less than 3% of normal air density and at temperatures of minus 70 degrees C, conditions approximating the surface of Mars.

This unique glider is the result of the work of the Perlan Project, a team of volunteers whose aim is for an engineless aircraft to fly to the edge of space at 90,000 feet, and explore how weather phenomena called ‘stratospheric mountain waves’ impact the ozone hole and change global climate models. The surrounding air temperature and chemistry is unaffected by the engineless craft, making it easier to study the atmosphere.

El Calafate in Argentina was the location for the successful flight. This remote area of Patagonia is ideally placed for such high altitude soaring because the stratospheric mountain waves are particularly strengthened by the polar vortex, a phenomenon which occurs only for a brief period each year.

The Perlan Project team wish to provide education and inspiration for young people seeking careers of exploration and adventure in engineering and science. Embracing innovation and exploring the boundaries of science are at the heart of the enterprise. Ed Warnock, CEA of The Perlan Project commented:

“This is a tremendous moment for all the volunteers and sponsors of Airbus Perlan Mission II who have been so dedicated to making our nonprofit aerospace initiative a reality. Our victory today, and whatever other milestones we achieve this year, are a testament to a pioneering spirit of exploration that runs through everyone on the project and through the organizations that support us.” 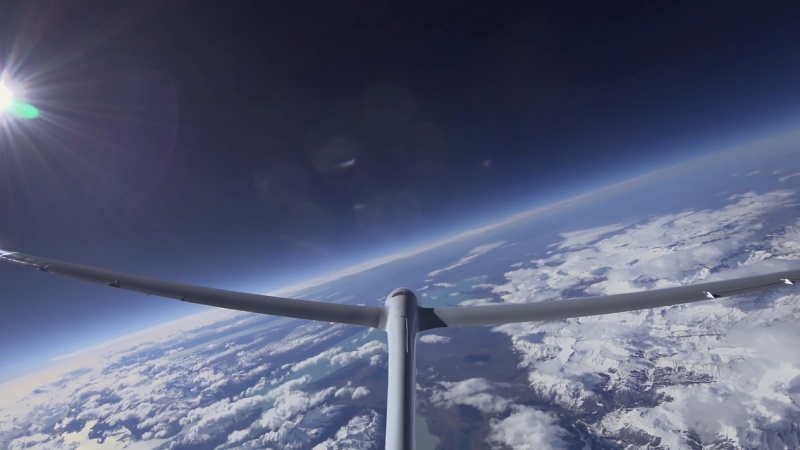 A tail photo taken during the record-breaking 2017 flight

The science behind the flight

Glider pilots have surfed on mountain waves since 1932. The process is like surfing on a wave in the ocean, except the glider is in the wave rather than on the surface of the wave. Einar Enevoldson, a NASA Test Pilot, saw evidence that in regions closer to the Poles, in winter, the waves could extend above the troposphere and well into the stratosphere. Previously, no one had searched for waves in the stratosphere in sub-polar regions in winter. From 1992 until 1998 he gathered more evidence that these waves existed, and discovered that they might be strong enough to lift a sailplane to remarkable altitudes. In 1998 Dr. Elizabeth Austin joined Einar in the search for an understanding of stratospheric mountain waves. She found that the Polar Vortex, and one of its principal components, the stratospheric polar night jet, existing only in winter, provided the high-speed wind in the stratosphere that powered incredibly high waves. The Perlan Project was formed to explore these waves and soar them to the edge of space.

The Airbus Perlan 2 is a pressurized sailplane designed to fly at the edge of space where the air density is less than 2% of that of sea level. It carries a crew of two and scientific instruments needed to explore the stratospheric mountain waves. The aircraft has a gross weight of 1,800 pounds (816kg) and a wing span of 84 feet (25.6m).  Its true flight speed at 90,000 will be 350 knots (403 mph).  The cabin will be pressurized to 8.5 psi (14,500 feet). The crew breathe pure oxygen provided by a rebreather system.

The Perlan 2 will fly to 90,000 feet at the edge of space to explore the science of giant mountain waves that help create the ozone hole and change global climate models. This will require the engineering of a spacecraft with glider wings that can fly in less than 3% of normal air density and at temperatures of minus 70 degrees C, conditions approximating the surface of Mars. These missions will provide education and inspiration for young people seeking careers of exploration and adventure in engineering and science.