It is very interesting to follow each pilot life story so we immediately contacted Yael to hear hers.

- I've started paragliding in 2010, and it quickly became clear that it would be a big part of my life, as being in the air was what I was enjoying the most.

What made you begin flying?

- As a kid, my dream was to become a helicopter pilot, I always wanted to fly so far as I remember. Then when I was 18, my best friend's brother worked as an instructor and that's how everything started.

- In life, the people who are inspiring me are those who are living for their passion, dedicated to what they like and pushing their limits to be the best in what they do. In sports, it's more or less the same. Every athlete fighting hard to come back after an injury is a source of inspiration. In the paragliding world, of course, Chrigel Maurer is an inspiring pilot, as he masters all kind of flying, acro, XC and hike and fly. It's definitely what I am aiming for, to be the most polyvalent pilot in the world.

- I fly since 2015 on the paragliding world cup tour and have 10 podiums until now. I was 3rd at the FAI European Championship last summer.

- When you start thinking about xc flying, you pass hours and hours drawing triangles on the planner... With my boyfriend and his friend Fifi, we have several triangles in mind. So after, the game is to be on the right time at the right place and choose the waypoints to put in our GPS.

- The previous record is a 222 triangle by the Austrian Michaela Brandstatter in Antholz, Austria.

What flying conditions make your record different from the previous one?
- I think when you want to break a record, you have to be the more efficient you can, so the weather conditions are one point, but also the glider and how you exploit the performance out of it. So having one of the best gliders on the market (Yael flies Ozone 3), combined with good flying conditions and teamwork makes it realizable

- A half day, getting the gear ready and analyzing the route. I was not ready enough with my GPS settings, the one I had were the one I use in competition and there were some fields that I didn't use and some I wish they were on my screen.

- My boyfriend Clement Latour, and the tracklog of Jonathan Marin who was flying a similar route last year.

As I told before, just Clement.

- The mental side. As at the beginning of the flight I was not believing that the conditions were good enough, I was not completely focused on going fast and being efficient.

- The Swiss federation and coaches, Michael Sigel who has explained me the procedure, and Maxime Bellemin, helping me to fill the claim with GPS coordinates and so on.

- The beginning was really hard with the low cloud base, it's only after 3 hours of flight that the weather turned good, and that was the decisive point. Otherwise, I've been critically low just once, so getting out of this low save was not easy, and after the 2nd turnpoint, it was hard because I was late and getting angry about losing time.  But except being a long and demanding flight, it wasn't technically really hard. The most difficult thing was to stay together in flight with Clement, as my radio wasn't working.

- Keep believing, maybe the day will turn out great, and if not, you wouldn't regret anything! 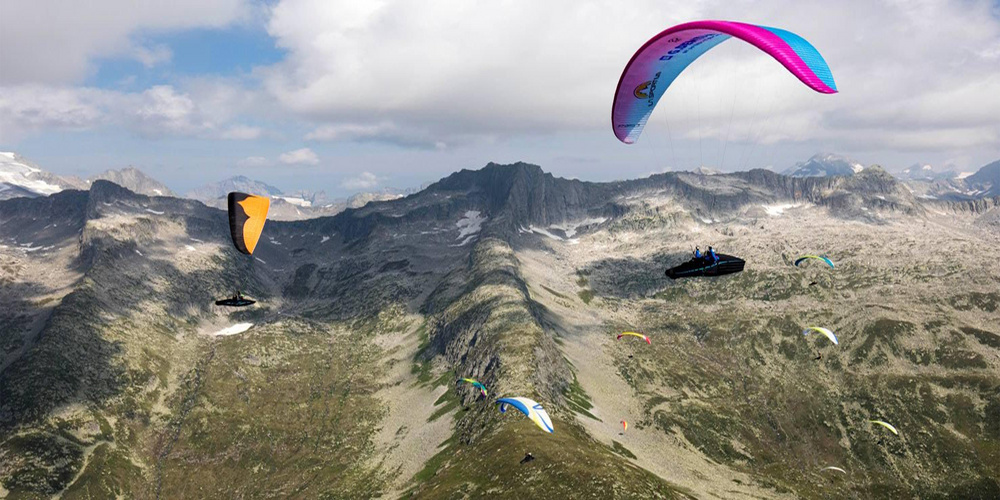