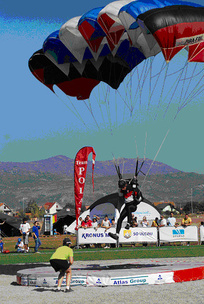 Freefall Style and Accuracy Landings are the two oldest competitive disciplines in the IPC calendar; and are known colloquially as « the Classics ».

The first World Championships in Accuracy Landings (then simply called Accuracy), were held in Bled, Yugoslavia in 1951.  This was a competition to see who could land closest to the target over a number of competitive rounds.  The competitor who scored the lowest number of points/measurement was the winner.

The essential principle remains, although there have been many changes over the years to the type of parachute used and the recording of the landing and subsequent measurement.

In the early days, simple modified military parachutes were used, which were difficult to steer despite a variety of modifications to the basic round canopy.  In 1962 the American designed Para-Commander ascending parachute was introduced and by 1966 all serious competitors were using a PC or a similar parachute produced by different manufacturers around the world.

By the mid 1970's the « square » or modern parachute had been launched into the sport.  The « Cloud » becoming the favourite of Accuracy jumpers, with its ability to fly precisely and slowly, giving the competitor maximum control onto the landing zone.

As the ability of the competitors improved, with the developments in the parachutes and experience of competition, the landing zone became more defined.  From a 25 metre area around a central cross, as the competitors took more risks to reach the target, a zone was designated with a pit dug and filled with pea gravel measuring 25m in diameter.  At the centre was a disc – usually of day-glow orange, 10cm in diameter.  A competitor whose first point of contact with the ground was on the disc scored 0.00.  4 judges surrounded the disc to record the first point of contact, and if it was not on the disc then the competitor was scored the number of centimetres from the disc to the landing point – to a maximum of 25 metres.

As skills and equipment improved, the maximum measurement decreased and today we use 16 cms.  Also the Dead Centre Disc went from 10cms, to 5cms, then 3cms to today’s 2 cms yellow on a black background disc.  We also have an electronic recording pad which measures in 1 cm increments up to 16cms.  This sits in the middle of a « tuffet » .  A tuffet can either be a deep foam mattress or an air-filled landing pad - similar to that used in pole-vaulting, or high jump.

Competitors jump in teams of 5, exiting the aircraft at 1000 meters and opening their parachutes sequentially to allow each competitor a clear approach to the target.  Their individual scores count for both the individual competition and for the team competition, the best of 4 is used.  For the team event the maximum number of rounds is 8, with a minimum number of 5 required to qualify for an event.

In the individual competition, after 8 rounds the top 25% jump a semi-final round, and the top 50% the final round.

Freefall Style was introduced into the competition calendar in 1962, at the World Championships in Orange, USA. Style jumper

Style demonstrates freefall control on the part of the competitor and the ability to perform a gymnastic pre-determined series of back-loops and turns as fast and cleanly as possible.  This is judged today, from a video recording, using a ground based camera with an exceptional lens to record the performance.

Over the years the equipment used by the competitors has improved to increase their aerodynamic shape and maximise their speed.

The competitor exits the aircraft at 2200 m and gathers speed in their fall position before starting the pre-designated series of manoeuvres.  They are timed from the start of the manoeuvre until its completion.  The maximum time scored is 16 seconds.  The score is the time in seconds and hundredths of a second to complete the series plus penalty times awarded for incorrect performance of the manoeuvres.

For the first 2 rounds (competitive jumps) competitors who have scored above the default time for that round are eliminated from the competition.  At the end of the 3rd round there is a 50% cut for the 4th round and again only 50% qualify for the 5th and final round.  The competitor with the lowest cumulative time is declared the winner.

World Champions are declared in each event, with a combined « Overall »  Champion declared of that competitor and team who displays exceptional abilities in the two aspects of the sport – precision canopy handling and freefall manouvres.

The competition is divided into events to determine the best Male and Female competitor and the best Teams.  There is also a Junior category as well, for competitors under the age of 25.