When parachutists leave the sky to practice their incredible skills inside a wind tunnel you have an exciting new sport: Indoor Skydiving!

Over the last two decades Indoor Skydiving tunnels have opened in cities around the world, creating a boom, especially in the last seven years. Since 2012 the number of wind tunnels has risen from less than 50 to more than 200. Many people who have never jumped from an aeroplane and never intend to have tried the sport. Indoor Skydiving is particularly accessible to the young, with some Indoor Skydiving facilities offering introductory sessions to children as young as five.

The tunnels are a circular space of varying diameter, made with transparent vertical walls in which a strong vertical airflow is produced by electric motors. The general public can watch the flyers revolve and rotate inside the tunnel, with the added value of the competition being easily visible to spectators.

Competitions consist of two different events: Indoor Formation Skydiving and Artistic Events. Just like in Freefall, they test the ability of the athletes to control their bodies, enabling them to create a routine, performing predefined compulsory moves or formations.

HOW IS IT SCORED?

Formation and Vertical Formation Skydiving team members must execute a formation properly before moving onto the next formation. If a team fails to execute it properly, it’s known as a bust. Judges watch the teams and count the number of successful formations. It’s quick work – hold, hold, hold, hold, in rapid succession. Each successful hold is worth one point. A bust is worth zero points. The best teams will score around 30 points per 45-second session, depending on the difficulty of each formation.

Freestyle competitors are awarded points between zero and 10 for both the technical performance and artistic presentation, which are combined to give a score. Weight is given to creativity, artistry, and the appropriate use of space and time.

For the Dynamic speed routines the clock starts when the first flyer enters the flight chamber and stops when the last flyers exits after they have completed three sets of predefined lines and maneuvers. If the flyers make a mistake in the predefined patterns, they will get five extra seconds added to their timescore for each mistake.

WHAT DO YOU HAVE TO DO TO WIN?

On the technical side, you need to match ability with performance and speed, and in the free routines the flyers must mix creativity with difficulty and fly cleanly and without hesitation, all the while maximising the interest for the spectator.

The first recorded instance of indoor skydiving happened in 1964, when a Nasa scientist working on the Apollo Space Programme experimented with human flight in a vertical wind tunnel built for research on the Wright-Patterson Air Force Base in Ohio. 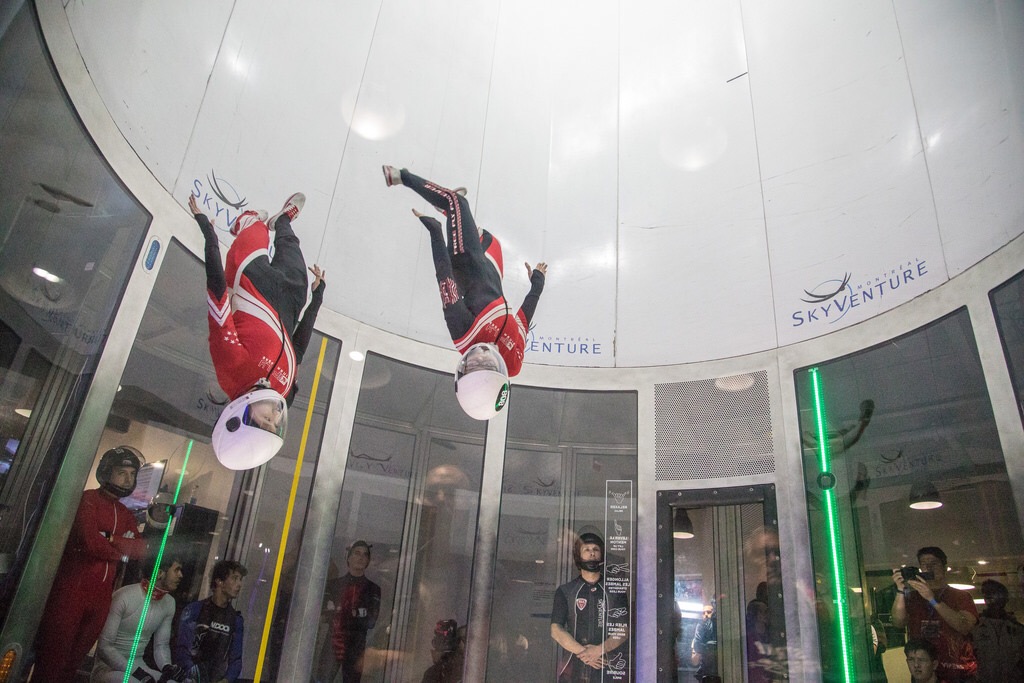