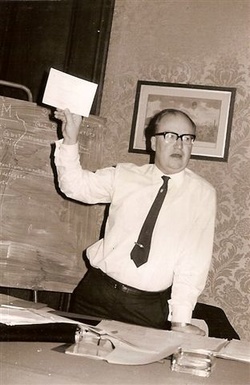 CIAM Meeting in Paris, December 2/3 December, attended by 24 countries, represented by 48 people; new countries Greece, Egypt and New Zealand.
Introduction of a second Vice-president as advised by the Director General.
Memo from the Director General emphasizing the need of the rule freeze.
Wankel-type engine accepted for use in aeromodels after approval of the formula for calculating the “stroke-volume” of this type of engine.
Safety rules for free flight approved and recommended as a basis for similar rules for C/L and R/C.
Rules have been laid down which have to be met before the status of “provisional” rules can be raised to “official”.
Elected Officers: Pimenoff remains President, first V-P: V. Kmoch (YOU), second V-P: L. Bovo, Secretary and Technical Secretary re-elected.
Changes in S/C Chairmen: RC: M.Hill replaces Patton; Ed/Info: H.J. Nicholls replaces A. Roussel.
First FAI Aeromodelling World Championship outside Europe (in the USA) since 1954 i.e. RC Aerobatics.

For this event a charter flight had been organized from Paris via London to transport all European team with their models to the USA: approx. 250 people in a long DC-8-63. 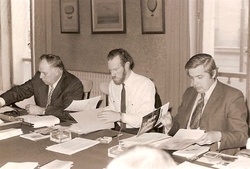 CIAM Bureau Meeting on April 4/5 in Paris. Following a request at the 1973 Plenary Meeting it was decided that a number of loose documents which have to be used with the Sporting Code (as collected by the former Technical Secretary) will be put together in one publication named “Documents Supplemental the Sporting Code”. This publication will contain: various Forms, Provisional Rules, Organizers Guides, Safety Rules, Judges Guides, etc. The AMA (USA) kindly offered to print this document.
Start of preparing the new 1975 edition of Sporting Code Section 4.

CIAM Plenary Meeting in Paris December 5/6, attended by delegates and observers from 29 nations (more than ever; 44 people).
Postal strike hampered communication just before and after the meeting.
Sporting Code Supplement (see Bureau Meeting) printed by AMA and distributed at the meeting.
For free flight power (F1C) engine run reduced from 10 to 7 seconds, effective 010176.
Revised rules for Space models will be included in Sporting Code Section 4 as Section 4d.
Provisional Control Line Combat rules (class F2D) declared “official”. The same applies to the provisional RC Thermal and Slope Soaring rules (class F3B). Both effective per January 1st, 1975.
New RC Aerobatics flight pattern program adopted and approved. A provisional manoeuvre schedule for future use approved for testing.
Starting at this 1975 Plenary Meeting the election of officers will be executed n two stages. At 16.00 hrs on the first meeting day the delegates will assemble for the nominations. The elections will take place the second day under the related agenda item.
Elections: all Officers and Subcommittee Chairmen were re-elected (see 1973). In RC the working groups are transformed into separate Subcommittees. C. Olsen remains in charge of RC Aerobatics and General Items; J. Sederholm (FIN) was elected chairman of the Pylon Race S/C, Dan Pruss (USA) of the RC Soaring S/C. It appeared that also for RC Helicopters a S/C is desired. Werner Groth (GER) will chair this S/C.

CIAM Bureau Meeting April 3/4 in Paris
Provisional rules for RC Helicopters will be presented at next Plenary Meeting.
Referring to the decision at the 1971 Plenary Meeting concerning the change of status of provisional rules to official rules and the upgrading of the latter to World Championship status, the Bureau considered review for reaffirmation or modification in order to make these rules more clear. 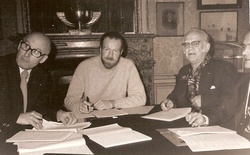 CIAM Plenary Meeting in Paris (December 4/5), attended by delegates and observers from 27 countries (53 people).
Control Line Combat approved as World Championships Class.
The new text re the requirements for the eligibility of rules for world championships (see 1975 Bureau Meeting above) was approved.
Provisional rules for new category Electric Powered Models approved.
Maximum noise level for RC Aerobatics fixed at 84dB(A) at 10 meters.
Provisional rules for Stand-off Scale approved.
During the elections a very particular occurrence took place.
Sandy Pimenoff nominated for another term as President was, according to FAI rules, not allowed to accept this nomination because a Committee President was allowed to stay only five consecutive years in office. This was a recent decision of the FAI General Conference. However the meeting wanted Sandy to stay and solved the problem as follows: All other nominees for president withdrew their nomination. Sandy was elected First Vice-president and with the absence of a real president the 1st V-P came in charge for leading the CIAM during 1976.
L. Bovo (ITA) and E. Krill (AUT) were elected 2nd and 3rd V-P respectively (for the first time a 3rd V-P entered office in CIAM). P. Allnutt (CAN) was elected Chairman of the Free Flight S/C i.l.o. Bovo; John Burkam (USA) was elected chairman of the RC Helicopter S/C replacing Werner Groth; and John Clemens (USA) was elected chairman of the Education & Information S/C.

CIAM Bureau Meeting April 1/2 in Paris
Regarding CASI decisions concerning the four-year rule freeze for Sporting Codes and the exceptions
allowed for safety items and clarifications, the Bureau scrutinized the decisions taken at the December 1975 Plenary meeting and laid down which of these decisions are not acceptable and have to wait for the next issue of our Sporting Code, that is the 1979 edition.

CIAM Plenary Meeting in Paris (December 2/3) attended by delegates and observers from 27 countries.
With reference to the 1975 CIAM President election it was reported that the General Conference had decided that there will no longer be any limit regarding the term of office of a Committee President.
Elections: Sandy Pimenoff again elected president unanimously. Krill changed position to 1st V-P; O. Saffek was elected 2nd V-P and J. Clemens (USA) was elected 3rd V-P. Pierre Chaussebourg (FRA) was elected French-speaking Secretary i.l.o. J. Ganier.
Changes with the S/C Chairmen were: C/L :L. Jackson (USA) i.l.o. P. Freebrey; RC Soaring G. Dallimer (GBR) i.l.o. D. Pruss; RC Pylon Race S. Sattler (USA) i..l.o. J. Sederholm.
Due to he increasing number of World Championships and the difficulty to find organizers a proposal had been submitted to change the 2-year cycle into a 3-year cycle. The proposal has been defeated, but the idea for setting up a long-term planning (as far as possible) was accepted.
For control line, working groups were set up for preparing a jury-guide for teamrace and preparing a rewrite of the combat rules.
The sub-subcommittee for RC helicopters had prepared a provisional set of contest rules, which were approved for trial use.
A complexity bonus for RC scale models has been introduced in order to compensate for lower flight scores due to the complexity of the prototype.

CIAM Bureau Meeting March 25 in Paris
A new voting procedure has been developed in order to cope with the problem that not all delegates are interested in each aeromodelling discipline. From now on there will be four voting possibilities: for, against, abstain and non-voting. The latter possibility is for those delegates who have no interest in the item to be voted on. Absolute majority will be based on the total votes of for + against + abstain. This procedure has to be approved by the FAI Statutes Committee.

CIAM Plenary Meeting December 1/2 in Paris, attended by delegates and observers from 29 countries.
A new edition of Sporting Code Section 4, Aeromodelling/Spacemodelling has been planned to be issued per January 1st, 1979.
Within the RC Subcommittee a new working group was created for Electric Flight (F3E, later renumbered to F5). Peter Blommaart (BEL) appointed chairman of this working group. Another working group was created for RC Frequencies, with Axel Tigerstedt (FIN) as chairman, in order to prepare the FAI/CIAM views for the World Radio Frequency Conference, which will be held in 1979. Harmonization of RC frequencies for aeromodelling worldwide is considered to be very important
Maximum weight for RC-scale models increased to 6 kg.
Dan Pruss (USA) was elected chairman of the RC Soaring working group.
The only change in the Bureau was that 2nd V-P Saffek had been replaced by Y. Sirotkin (USSR). 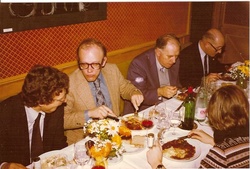 CIAM Bureau Meeting March 30 in Paris
The president will attend a meeting of the FAI Statutes Committee to resolve the problem of absolute majority voting (ref. March 1977 Bureau Meeting). The 1978 Control Line World Championships in England included the first official World Championships for class F2D Combat.
CIAM Meeting November 30 - December 1 in Paris, 30 countries represented, total attendance 71 people.
The FAI Statutes Committee had approved the voting procedure as proposed in the March 1977 Bureau Meeting.
All subcommittees were ordered to go into the noise problems created by the models belonging to their respective disciplines.
The description of the task of jury, timekeepers and circle marshal for combat will be included in the combat jury guide.
Provisional Stand-off scale rules were upgraded to official rules, effective per January 1st, 1983.
50 Copies of the second issue of the Sporting Code Supplement compiled and printed by AMA/USA distributed at the meeting.
Changes in the Bureau were: 1st V-P J. Clemens (was 3rd V-P); 3rd V-P Y. Sirotkin (was 2nd V-P). Pierre Chaussebourg (FRA) was elected Assistant Secretary. Changes in the S/C Chairmen were: I. Kaynes (GBR) replaces Allnutt for the Free Flight S/C; H. DeBolt replaces Sattler for the RC Pylon Race Working Group and D. Chapman (USA) replaces J. Burkam for the RC Helicopter W.G.

CIAM Plenary Meeting November 29/30 in Paris. 29 Countries, 68 people in attendance.
The universal rules for electro models, prepared by the subcommittee, were approved and will be effective per January 1st 1983. From that date it will be possible to organize World and Continental Championships for this category.