The year 2020 turned out to be a very memorable year. At the end of 2019, the first reports came from China that a new virus had been identified, later referred to as Covid-19 pandemic. In early 2020 it came over to Europe, shortly afterwards it spread worldwide.
CIAM had to deal with it in the run-up to the Plenary Meeting. This was canceled in mid-March.
Given the risks and travel restrictions imposed, the Bureau decided that there would be no World and Continental Championships in 2020 and that they would be postponed to 2021. World Cups were postponed for some time and later canceled for the full year.
In the meantime, the Bureau had switched to communication via ZOOM (internet).
The Plenary Meeting was postponed until the fall.
During the summer, local regulations were relaxed without leading to many activities. 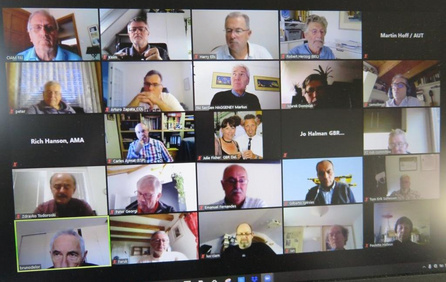 The e-Plenary Meeting was announced end of September. This took place from October 10th to November 14th via Zoom and was divided into e-technical meetings for F2, F9, F5B, F3FJ and Pylonrace, votings and the e-Plenary Meeting itself. Thanks to the good organization, everything went smoothly.

Proposals for Technical Meetings that have not been held now will be moved to the next opportunity. The working method for EDIC will be further discussed and laid down.
Changes: Vernon Hunt (GBR) was elected i.l.o. Ferenc Orvos as Control Line chairman.
F5K (Thermal duration gliders for multiple task competition) was adopted as a new provisional class. The transition from electric pylon race from the Electric subcommittee to Pylon race has been completed.

There was no Open Forum.
In principle, subsequent Plenary Meetings will take place in the same way.
A ZOOM meeting will be organized to map out the problems associated with the globally imposed obligations on UAVs including model aircraft.
During the December Bureau Meeting, the World and Continental Championships program will be established as far as possible.

CIAM E-Plenary Meeting by Zoom from March 27th till May 8th.

Still suffering from the Covid-19 pandemic, the 2021 Plenary Meeting has been held in the same way as last year by Zoom. Technical Meetings were held from March 27th till April 18th for Education, Drone Sports, RC Aerobatics, RC Pylon Racing, SM Space Models, RC Helicopters, RC Soaring, Free Flight and General Rules. An overview has been made of the advices from the reports of the e-Technical Meetings. All proposals adopted by the Technical Meetings, including any amendments, have been incorporated into the electoral system. This is the basis for the vote by the delegates.

For the E-Plenary Meeting on May 8th there were 70 participants.
Changes: Barrie Lever (GBR) was elected i.l.o. Rob Metkemeijer as Pylon Racing chairman.

There were no new official classes.The class which was previously called “F3RES” ( 2 meter RC gliders) became provisional class.
There was extensive discussion about the fact that at the end of 2018 60,000 euros were transferred from the CIAM account to the FAI.
Besides for Space Models all for 2021 planned World or Continental Championships were postponed to the first possible moment. International competitions started again after July 1st.

The December Bureau meeting was organized by using the zoom platform.

Also in 2022 the CIAM Plenary Meeting was held via Zoom for the third time because of Covid 19. Technical Meetings were held from April 2nd till April 16th for Education, Free Flight, RC Soaring, Scale, Drone Sports, RC Pylon Racing, RC Electrics, Control Line and CIAM General Rules. A report was made with the recommendation from the e-Technical Meetings. All proposals adopted by the Technical Meetings, including any amendments, have been incorporated into the electoral system. This is the basis for the voting by the delegates.

For the E-Plenary Meeting on May 7 there were 62 registered participants.

A limited number of proposals was submitted. A Bureau proposal for a new CIAM Award was introduced. CIAM Legend is the name and it will be awarded to those who managed to win the title of World Champion for three times or more. A proposal for a  promotional class from The Netherlands was accepted for application by the Education subcommittee. New provisional class: as F3L, but with electric motor.

The “old” yearly scheme for organizing championships is almost in place again.

A Zoom meeting about implementing UAV regulations around the World was held on February 26.